Kendall Square is a Model for Smart Urban Renewal

An opinion piece from Paul McMorrow in today’s Boston Globe speaks of Kendall Square in glowing terms. You should read the whole article, but here’s the key paragraph: 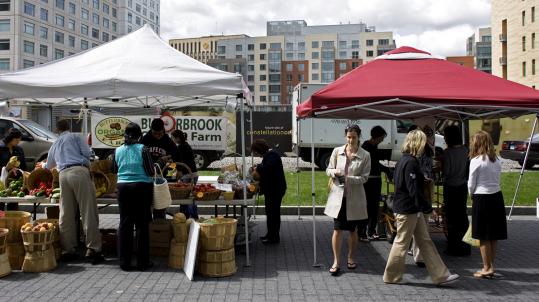 With a smart blend of retail, R&D, office space, and housing, Kendall Square has become a model of urban revitalization. Image via Boston Globe.

As mega-developments in Boston’s Seaport, Somerville’s Assembly Square, and Quincy Center speed ahead, Kendall Square’s revitalization effort, which is dominated by funky independent retailers, stands out as an important test case. Real-estate firms used to dealing with bland chains are making money in Kendall Square, not in spite of going independent, but because they’ve gone independent. Kendall landlords have created a neighborhood that’s a better place for everyone — their investors, small entrepreneurs, corporate tenants, residents, and the wider Boston region. So now, in places like the Seaport and Assembly Square and Quincy, the choices are stark: Either follow the Kendall model, or construct corporate neighborhoods that could appear on any airport mall road in the country.

The revitalization of Kendall Square has been a focal point of my public service, and we’re applying the lessons we learned in Cambridge to the new development at Assembly Square in Somerville. Unlike Mr. McMorrow, I don’t see development as an either-or proposition, and we certainly didn’t rebuild Kendall Square by pretending any one of us had a monopoly on answers. But as Mr. McMorrow points out, Kendall Square “is humming because neighborhood leaders paid attention to who was filling those empty storefronts.”

A scale model of the new Assembly Square.

I’ve been around long enough to remember when Kendall Square wasn’t such a hotspot. When I was growing up in East Cambridge, big-name chefs wouldn’t even think about setting up shop here, and we certainly couldn’t call ourselves the most innovative square mile on the planet. But we always knew Kendall’s best days were ahead of it—and I believe they still are. All it takes is some hard work, some patience, and a lot of passion from the local community.

The Kendall Square development model worked, and I’m proud to have played a role in this success story. With a little luck and a lot of elbow grease, we’ll be saying the same thing about Assembly Square soon.