As was reported in the Somerville Journal earlier this week, Waste Management, which operates a waste transfer station in the Brickbottom area of Somerville, will be required to vacate its location on Poplar Street by October 1st, 2012. The eviction of the transfer station was a goal that Somerville Mayor Joe Curtatone articulated in his 2011 State of the City address:

“We aim to reclaim the Brickbottom and this is an essential step to making that happen,” said Curtatone in a press release. “This represents an opportunity to build a new gateway to the city.”

The old Somerville municipal trash incinerator was built in 1907, according to “Beyond the Neck: The Architecture and Development of Somerville, Massachusetts,” and the tan-brick building survived the demolition that occurred all around it. Sometime in the 1990s, the building was converted into a trash transfer station, basically a depot on the way to dumps or incinerators. Read the rest of Andy Metzger’s October 4th, 2011 article on the removal of the transfer station.

This is exciting news for an area that has seen decades of stunted growth after most of the neighborhood was demolished to make way for the Inner Belt Expressway, a highway transportation project which was never completed. It is my hope that the future completion of the Washington Street station as a component of the Green Line Extension will pave the way for strong, mass-transit based redevelopment of the transfer station and surrounding areas. 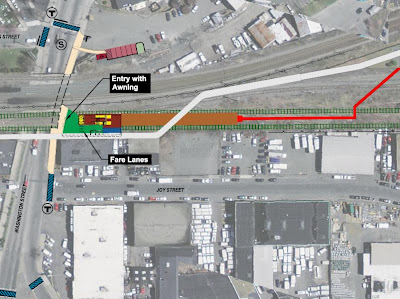 As can be seen in the photo above, the close proximity of the transfer station to the planned Washington Street station makes it a prime area for mixed-use or residential development with excellent access to the Green Line and local bus service, and a short walk to shops, bars, and restaurants in Union Square. I am looking forward to seeing how this space will grow and change for the better in the coming years.