Yesterday, I joined a number of my colleagues and Governor Deval Patrick in testifying in support of a bill that would allow undocumented immigrants in Massachusetts to attend state colleges and universities at the in-state tuition rate. This bill, which is supported by Massachusetts universities, is designed to give those who were brought to the United States as children a better chance to attend college and further their education.

As is becoming all too clear, jobs that pay wages that allow one to pay for college and support a family are becoming increasingly scarce. This reality has generated a cycle of poverty in many communities in which the haves and have-nots are determined by their ability to pay for higher education for themselves and their children. Immigrant communities are especially susceptible to this cycle because of the additional barriers to higher education that come with undocumented status. The in-state tuition bill is designed to remove these barriers by affording undocumented children in Massachusetts the same status as their peers when they apply to state schools.

While some may oppose this bill on the basis of cost, Massachusetts Taxpayers Foundation, a non-partisan organization which tracks and analyzes state spending, has found that it will generate revenue for the state. 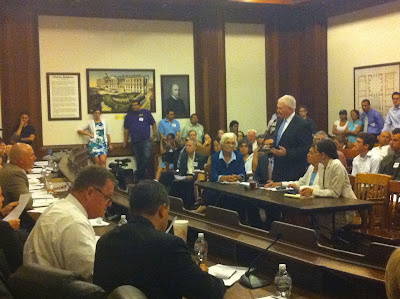 I think that one of the best things we can do in Massachusetts to honor our heritage of immigration is to support a new generation of immigrants as they try to make America their home, too. I was proud to see the Governor and many of my colleagues in the legislature stand up in support of this bill yesterday. I am looking forward to its passage.