On Thursday, October 7th 2010, I attended and gave brief remarks at the grand opening of the Career Family Opportunity (CFO) program in Cambridge, operated in partnership by the Crittenton Women’s Union (CWU) and the Cambridge Housing Authority (CHA). The event, which was held at the Cambridge Housing Authority’s Pisani Center, celebrated the start of an exciting and innovative social program available to single parents who are in the CHA system.  The goal of CFO is to give single parents the tools they need to become financially self-sufficient, allowing them to become independent from government assistance within 5 years of enrollment. 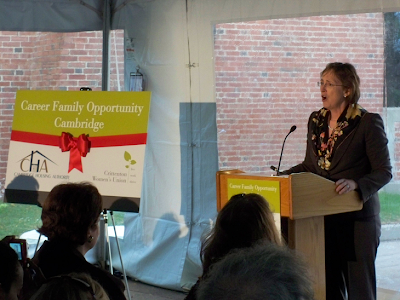 20 Cambridge families currently residing in CHA public housing have applied and been chosen to participate in CFO. CFO will help each participating parent find a job that pays enough to provide for their family, and will provide the participant with a $10,000 savings account to use for their family’s expenses. Getting families back on their feet quickly is a priority for the Cambridge Housing Authority, and as CHA Deputy Director Michael Johnston pointed out, necessary for CHA if it hopes to provide adequate housing to those who need it. There are currently 13,000 people on the CHA’s waiting list for housing, and at the current rate it will take 24 years to completely clear that list. With so many needing affordable housing now, I am very excited to see the CHA taking an innovative step forward that will help families leave public housing faster, easing the strain on an already overburdened system without imposing term-limits on residents. The CWU has operated this program with high levels of success in Boston, and I see no reason why it won’t be just as successful here in Cambridge. 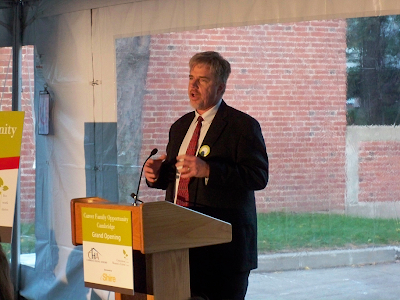 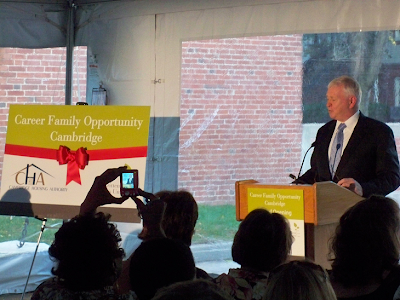 I spoke about how I feel that CFO and programs like it are critical for sustaining our communities in tough times. 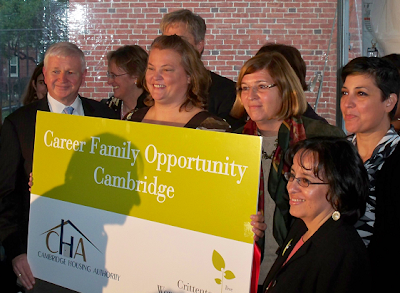 Tricia Berry, a CFO program participant, (foreground, second from left) gave a moving speech about how CFO has helped her and her son.

The CFO program will undoubtedly have far-reaching effects for our neighbors and neighborhoods. By helping single parents, it will help their families, and with more families becoming independent faster, more of the people who need safe, affordable housing will get it when they need it.