As you surely know, Cambridge is recognized across the globe as a center for academic study and technological advancement. The prestige that MIT and Harvard bring to the city is something that Cambridge should certainly be proud of, but equally worthy of our City’s pride and recognition are the thousands of people who work behind the scenes to keep these institutions running at full steam.

On Wednesday, June 16th, I co-hosted a forum with SEIU Local 615 at the State House to discuss the state of jobs at higher education institutions across Massachusetts. Wayne Langley, the higher education director at SEIU Local 615, joined John Collins, an employee of MIT, and Juan Gutarra, an employee of Harvard, in expressing their concerns about how the endowment crisis has impacted workers and local communities. 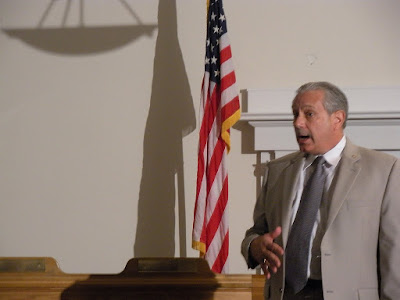 Wayne Langley discusses the findings of the white paper.
Mr. Langley discussed the findings of a white paper that was commissioned by SEIU Local 615 to study the effects that the financial downturn has had on endowments at institutions in New England. The paper’s findings point to the need for higher education institutions to pursue more responsible investment strategies in order to protect the livelihoods of their workers. It is my hope that these findings will help start a productive dialogue within the legislature about how to ensure that the communities of the Commonwealth that depend on higher education jobs can survive times of economic instability. 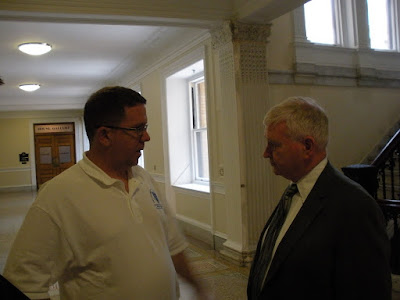 John Collins speaks to Tim after the event.

Mr. Collins, a long time resident of Somerville and active member of SEIU Local 615, gave a powerful speech about his recent experiences as an employee of MIT. He explained that as he has watched MIT expand, he has also seen friends, co-workers, and neighbors lose their jobs at the institution. He stressed that many parts of Cambridge and Somerville depend heavily on MIT for good, reliable jobs, which have become harder and harder to find in recent years. 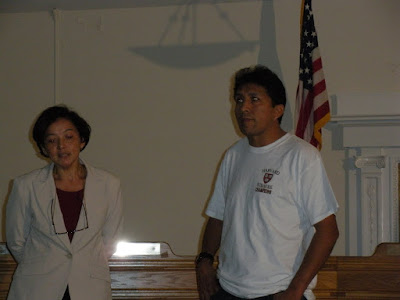 Juan Gutarra described how his experience working at Harvard has changed during the economic downturn.

Mr. Gutarra, speaking through a translator, explained that he has faced a similar situation at Harvard, where he has worked as a janitor for the past decade. He described how his hours have been cut and altered, making it harder for him to get by, and asked that more oversight be exercised over universities to ensure that endowments are invested responsibly.

It was a great honor to co-host this important discussion with SEIU Local 615, and to hear the concerns and challenges of our community’s workers firsthand. I believe that this forum has helped raise awareness in the legislature over what is a critical situation to so many, and I am looking forward to working with my colleagues to tackle this complex issue. Above all, I will continue to stand by the workers of Cambridge and Somerville in the months and years to come.