After years of countless meetings, public hearings, letters and tireless advocacy from so many involved community members, I’m pleased to announce that the Commonwealth has reached a major milestone in the extension of the Green Line through Cambridge, Somerville and Medford with the release of the Final Environmental Impact Report (FEIR) by the Executive Office of Energy and Environmental Affairs (EOEEA).

The Green Line Extension will vastly improve the state of public transportation in the City of Somerville, making our community easier to access for residents and visitors. As this project moves forward, however, we need to make sure it is done in a way that is right for the people who live near it and the people who will use it when it is completed.

Before a project of this magnitude can be undertaken, it is important that we study the potential impact on the environment, the safety of the community, and the quality of life for the Green Line Extension’s immediate neighbors. Last year, EOEEA released a Draft Environmental Impact Report/Environmental Assessment (DEIR/EA) detailing the effects of the proposed extension.

In January, I sent a letter with my comments regarding the DEIR/EA to Secretary Ian Bowles of EOEEA. I used my comments to express many of the concerns that members of the community had voiced to me. On June 15th, the FEIR was released, and I am happy to say that many of the changes to the DEIR/EA that our community advocated for have been included in the final report.

First and foremost of these changes is the decision about the location of the new Green Line maintenance facility. In the letter that I sent to the Secretary in January, I expressed my concern that the use of Yard 8 for the maintenance facility (which was at that time the favored option) would negatively impact the residents of the Brickbottom area, and would potentially stifle future economic development within the Inner Belt. In my comments, I stressed that Option L, one of the two alternatives presented in the report, was a far better choice for the location of the maintenance facility. Thanks to the active participation among members of the community, including elected officials, the Somerville Transportation Equity Partnership (STEP) and the residents of Brickbottom, I am pleased to report that MassDOT has chosen Option L as the preferred site for the maintenance facility.

This is a victory for the residents of East Somerville and East Cambridge for a number of reasons:

• Option L will create more separation between residential areas and the maintenance yard.

• It will not preclude road construction between Brickbottom and the Inner Belt, meaning that future economic development in the area will not be hindered.

• The Brickbottom Artist Building, Hampton Inn Hotel, Glass Factory Condominiums, and future developments on Water St. will experience no more than one decibel of additional noise from the Option L maintenance yard.

• The placement of the facility in an existing industrial area will mean that the local environment will not be substantially altered.

• The yard will comply with all state and federal air quality regulations, and will reduce the amount of storm water drainage at the site. 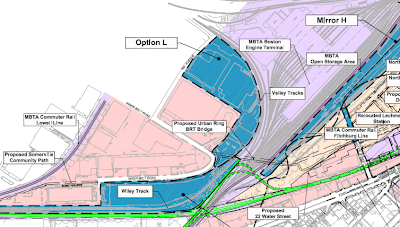 In my January letter, I also expressed concerns over the design of the proposed Lechmere station overhaul. These concerns were echoed by the East Cambridge Planning Team (ECPT), and I am pleased to see that the redesign includes better door access from the north and south sides of the station, as well as fare collection and other amenities that are now fully inside the station, shielded from the elements. The bus drop-off/pick-up area will now be directly connected to the station by a door, and the station will be fully handicap accessible.

One of my most pressing concerns about the Green Line Extension project is that it will move Lechmere station to the opposite side of the Monsignor O’Brien Highway, creating a potentially dangerous situation for the thousands of commuters that will now need to cross a wide, busy street to access Lechmere from East Cambridge. The layout that has been proposed since the DEIR includes accommodations for a wider pedestrian crosswalk, and the FEIR makes the recommendation that a median no less than 20 feet wide be constructed on the O’Brien Highway in order to shield pedestrians from turning traffic. Although this is not an ideal solution for the commuters travelling to the station from East Cambridge, it is a vast improvement over earlier proposals. I will continue to fight both in the State House and City Hall to make pedestrian safety a top priority as the project moves forward. 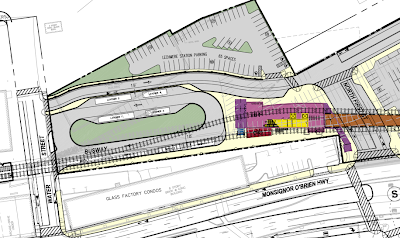 Finally, I want to share with you my excitement at seeing the Green Line Extension moving closer to becoming a reality. The release of the Final Environmental Impact Report marks a significant step forward for a project that will be crucial to the future of East Somerville. Affordable and efficient transportation is critical to any urban area, and the latest numbers indicate that the Green Line Extension will increase daily ridership by 52,000 people by 2030. That means that each day, 25,000 fewer miles will be travelled by cars through our communities! Now that, my friends, is a breath of fresh air.