When a three-alarm fire destroyed the East Somerville Community School over the weekend two years ago, hundreds of Somerville children were suddenly left without a school. Although we were all fortunate nobody was hurt in the blaze, the fire left hundreds of children spread across the Somerville school system missing their community school and their friends. This month, a day after the second anniversary of the fire, former students and teachers made their way to the State House to share their personal stories with Somerville legislators and advocate for immediate construction of a new school.

Roughly sixty 8th graders, who have been spread out across Somerville, joined principal Holly Hatch and other Somerville educators. Armed with their recent studies of government, letters to the Governor and legislators, and their personal stories, they gathered in State House Hearing Room B1 and made an impassioned case to fast-track the construction of a new school to replace the one they lost. Seven students and one teacher read their testimony to Representative Denise Provost, Representative Carl Sciortino, myself, and staff from the offices of Senators Patricia Jehlen and Anthony Galluccio. 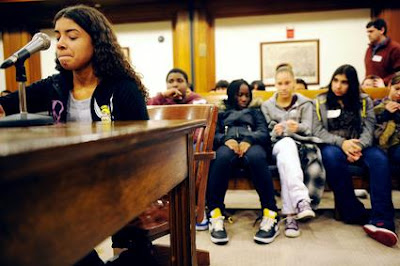 The entire delegation was impressed with the poise, courage, and maturity of the speakers and the students in attendance.

After presenting their testimony to the Somerville delegation, the students delivered letters to Governor Patrick, Senate President Therese Murray, House Speaker Robert DeLeo, and the Massachusetts School Building Authority (MSBA). By establishing an organized coalition of Somerville legislators, educators, and personally affected residents and then targeting the key decision-makers, these 8th graders demonstrated that they have taken their studies of government seriously. This is how effective advocacy works.

The next step will be taken by the MSBA, which will certify the number of enrolled students and determine the scope of the project. It is still uncertain whether the school will be built entirely from scratch or whether sections will be salvaged and updated. The Somerville School system will need to figure out the best use of the money from the MSBA.

Our goal remains the same: we want a safe community school in East Somerville equipped with modern facilities. My office, along with the Somerville delegation, will be in continued talks with Mayor Curtatone and will continue the advocacy work started by these students with the state and the MSBA.

Their visit also included a guided tour of the State House and photos in front of the golden dome and at the Grand Staircase. 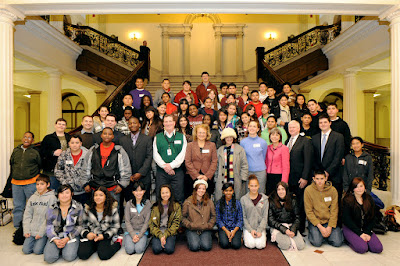