CAMBRIDGE – St. Peter’s Field map
In memory of Todd Schwartz: ForTodd.org
Oldtime Baseball web page
Cambridge Chronicle Article
For the 15th consecutive year, players and hundreds of fans gathered on St. Peter’s Field for an oldtime baseball game and to support a great cause. This year all funds went to the Todd Schwartz Memorial Fund, which helps support the Jimmy Fund Clinic. Todd was a young man who lost his battle with cancer in 2002.

It was a beautiful evening and each team had an incredible collection of oldtime uniforms. This year pitted Team John Hancock versus Team Shapiro. 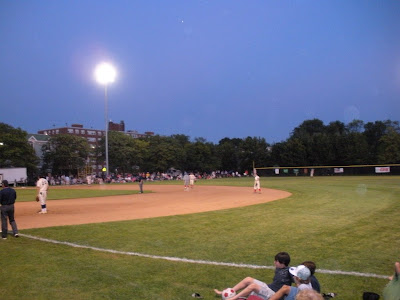 Hundreds of baseball fans settled around the foul lines on both sides. 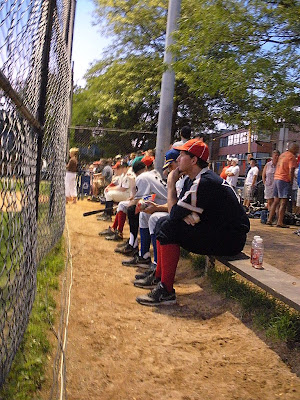 It was a great night to watch some baseball and catch up with some of my old friends, and even see one of my colleagues in action. My friend Anthony Galluccio, for Cambridge City Councillor and State Senator representing parts of Cambridge, Somerville, and the surrounding cities, suited up for the game in a classic Puerto Rican uniform: 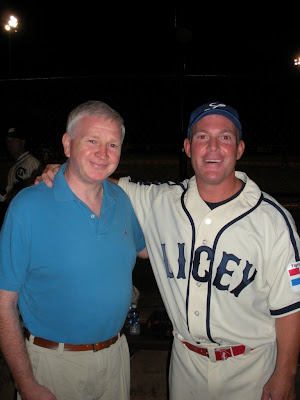 Anthony Galluccio gets ready to take on Cambridge’s own Bobby Fournier.
He went to bat against Cambridge pitcher Bobby Fournier and made solid contact, grounding into a putout from former Red Sox player Lou Merloni.

The game brings together college players and baseball stars from Massachusetts, the country, and even abroad. Cambridge and Somerville were well-represented by Danny Nugent, Bobby Fournier, Billy Fitzgerald, James Likis, and Senator Galluccio. Red Sox legend Johnny Pesky was an honorary manager, taking pictures with fans and signing autographs. I even spotted sportswriter Dan Shaughnessy in the crowd, watching his son Sam play outfield for Team Shapiro.

The annual game is a great time for a great cause, and it seems to get bigger and more popular every year!