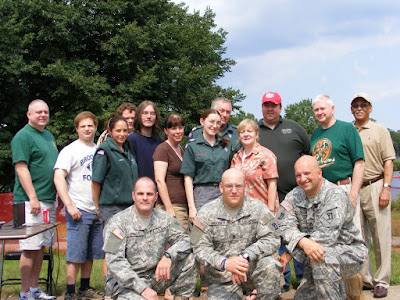 On Saturday,I joined the American Legion Marsh Post #442 as they hosted a welcome home barbeque for our local soldiers returning from duty in Iraq. Company C First Battalion of the 181st Infantry Massachusetts Army National Guard returned safely home from Iraq on March 19, 2008 after being deployed July 9, 2007.

The event was organized by Jim Gray of the Marsh Post in coordination with the Cambridge Veterans’ Organization, Boy Scout Troop 45 and the City of Cambridge’s Department of Veterans’ Services. Being sure that our troops who are returning home from the war in Iraq are honored for their service should remain an important focus and organizations such as these should be commended for their efforts.